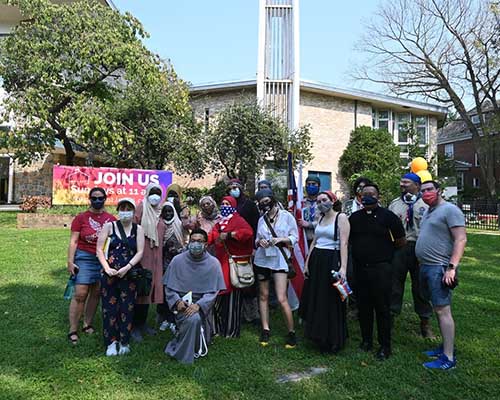 On a sunny fall day in Washington DC, I went to mass with a group of student friars at Our Lady of the Americas parish near embassy row. Afterwards, we went out to Sunday brunch together to enjoy a fraternal meal. I was discussing with my brothers the kind of materials I was looking forward to studying for my comprehensive exams next spring… and the ones I wasn’t. One I had mentioned my interest in was Jeanine Hill Fletcher’s book The Sin of White Supremacy: Christianity, Racism, and Religious Diversity in America, which is under my interreligious studies section. I was expressing how important it was that I learn some of the messy history that has led to the type of relations the Church exhibits today with “the other”– the racial other and the religious other, especially. I had taken a couple courses that treated interreligious dialogue and hermeneutics and have become aware of some of the current social dilemmas plaguing multicultural and multireligious interactions. As a young Franciscan in studies, this is one of the kinds of Church diplomacy issues that I find both frustrating and exciting to study. Not a few minutes after wrapping up our meal, I received a text from a Paulist seminarian friend asking if I was aware that the annual DC Interfaith Unity Walk was back on schedule for that afternoon. I hadn’t the faintest idea! I had only ever zoomed into IFCWM (InterFaith Council of Metropolitan Washington) events over the past year. 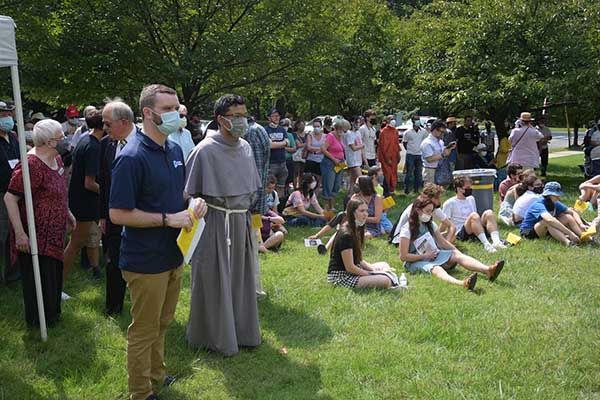 So, excusing myself from my confreres–who had made other plans for their Sabbath afternoon–I hopped onto a metro bus and headed toward the gathering site at Washington Hebrew Congregation. While there we were able to mingle with other participants before the opening remarks. We met other Christians, Jews, Muslims, and Buddhists as we awaited the opening prayers offered by different faith leaders in the DC area. People were fascinated to meet a real life friar! My Paulist friends, Chris, Tim, and I were sharing with one Mormon gentleman about the ecumenical and interreligious dimensions of our respective charisms. He was enthused that the Catholic Church had raised consecrated religious who’s spiritual patronage extends its hand out to engage sisters and brothers of other Christian denominations, and even of other religions! A couple of Muslim women approached me with their Misbaha (Arabic: مسبحة mas’baha) prayer beads and asked me about my Franciscan Crown Rosary. Their Imam joined us for a brief conversation on the significance of our respective prayer beads before we were abruptly interrupted by the interfaith paparazzi. We didn’t get to finish our conversation because the event had begun, but the exchange was a special one because we were able to discuss in short the benefit of meditating with beads in our respective prayer lives.

I grew up in the greater DC metro area and am accustomed to interacting with a great diversity of people from many walks of life, but seldom did I ever have intentional interreligious conversations with peers until I was in college. I had meaningful conversations with other Christians, but had not really done the same with my friends from other religious backgrounds. It became apparent to me that there was something inspirational in sharing about my faith life with friends who were amenable to going there. For the most part they were conversations of a spiritual nature, ecumenical and interreligious friendships that permitted our relationships to “go deep” and appreciate each other’s spiritualities. I guess you could say I’ve always enjoyed having the opportunities for friendly exchanges about the spiritual upbringings of our lives.

For me, experiences like the Interfaith Unity Walk edify my Franciscan vocation by giving me the opportunity to practice the ‘ministry of presence’  in non-Catholic spaces. This walk gave me the opportunity for interreligious exchanges and for building up my sense of solidarity among religions building up the common good. Interacting with the Muslim participants reminded me of the sort of proto-dialogue Saint Francis had over 800 years ago with Sultan Malik al-Kamil. That historic happening left the friars and the Church with an impressionable spiritual legacy ripe with Islamic influences, still in practice today. Impressed with the frequency with which Muslims prayed throughout the day and struck by Islam’s recognition of Mary, Mother of Jesus, Francis encouraged the friars to recite the Angelus prayer he composed three times a day to draw prayerful attention to the order’s Incarnational spiritual emphasis. The Angelus is now widely prayed throughout the Church. Francis was also moved by the Islamic tradition’s “Ninety-nine Most Beautiful Names of God” (on which the Misbaha focuses its meditation) that he composed a similar “Praises of God,” which was a much shorter Christian rendering of about thirty-three names of God, some of which are synonyms or parallels of those names found in the Islamic prayer. 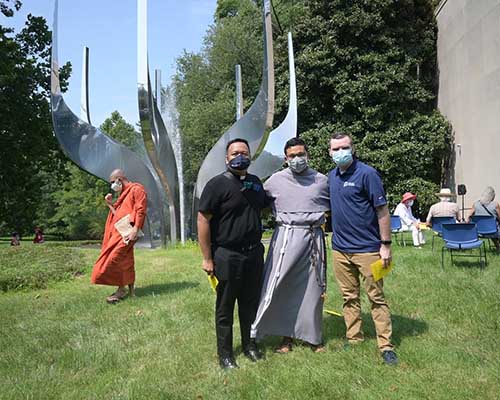 I look forward to many other opportunities to dialogue with interfaith conversation partners, but am especially hopeful for more interreligious and ecumenical friendships!

Many languages, one evening in honor of Our Lady