In the early days of my religious life, during our formation classes, we friars were taught about one of the predominant vices – and a constant pitfall – in religious life: Clerical Envy. Envy, however, is not just a danger in religious life: it’s a danger in all states of life. And for those involved in evangelisation (priests, religious and laity alike), it is an easy trap into which to fall.

Firstly, let’s examine the nature of envy. What is it exactly? Envy is a passion and is classed as one of the Seven Deadly Sins. St. Augustine dubbed it “the daughter of pride”.

In his book The Spiritual Life – a Treatise on Ascetical and Mystical Theology, Father Adolphe Tanqueray, a French Sulpician priest, wrote that envy is a tendency to be saddened by our neighbour’s good as if that good constituted an affront to our own superiority. It is a desire to see our neighbour deprived of a particular good that offends us.

Envy is not to be confused with Jealousy. Jealousy is an excessive love of our own good accompanied by fear lest we be deprived of it by others. In other words, we are envious of our neighbour’s good, and jealous of our own.

Envy is not to be confused with Emulation. Emulation is a praiseworthy sentiment, urging us to imitate, equal, surpass the good qualities of others, but always by means that are fair.

Envy is opposed to the virtue of Charity. Envy:

It is interesting to see how envy has been portrayed in works of literature. Let’s consider just two examples:

This year marks the seven hundredth anniversary of the death of the great Italian poet – and Third Order Franciscan – Dante Alighieri. Dante is famous for his Divina Commedia [Divine Comedy], part of which comprises Purgatorio [Purgatory]. In Purgatorio the ancient Roman poet Virgil takes Dante on a journey through the different levels of Purgatory.

In one part of the Purgatorio, Virgil leads Dante to a cliff, where terraced steps ascend the cliff in a circular fashion. No exterior wall exists against the edge of the cliff. They behold the envious people lined up against the cliff face steps. He describes how “each soul supported another with his shoulder, And all leaned for support against the cliff”. On closer inspection, Dante saw how “…each soul has its eyelids pierced and sewn, With iron wires, as men sew new-caught falcons, Sealing their eyes to make them settle down.”

Many of us are familiar with Aesop’s Fables, those little Greek tales we read as children. These fables all have a moral to their story, and are still well-worth reading as adults.

One story touches on our topic of envy. In it we read the following:

“One of the pagan gods came down to earth and encountered two men: one envious and the other covetous. The god told both men that he would give each of them a gift, provided that one of them did the asking for them both. But, see, whatever the one doing the asking would request for himself the other would get double the amount of that very same thing; 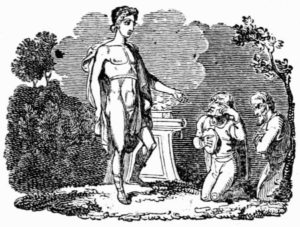 When this condition was stated the two men began to argue as to which one of them would do the asking;

The covetous one would not agree to do the asking, because he wanted to have twice his companion’s request;

When the envious man heard that, he wanted to make sure his companion would get little good from the doubling of his petition, So, he asked for his gift viz. that he might have one of his eyes put out;

Accordingly, by reason of his request, the envious man lost one eye and the covetous man lost both.”

So what can one do to rid himself of this vice of Envy? Fr. Tanqueray suggests to us the following:

Envy has no place in our lives. It is contrary to the message of the Gospel. We would do well to bear in mind the wise words of established spiritual writers such as Fr. Tanqueray.

For I was Hungry

Pray for Our Elected Officials