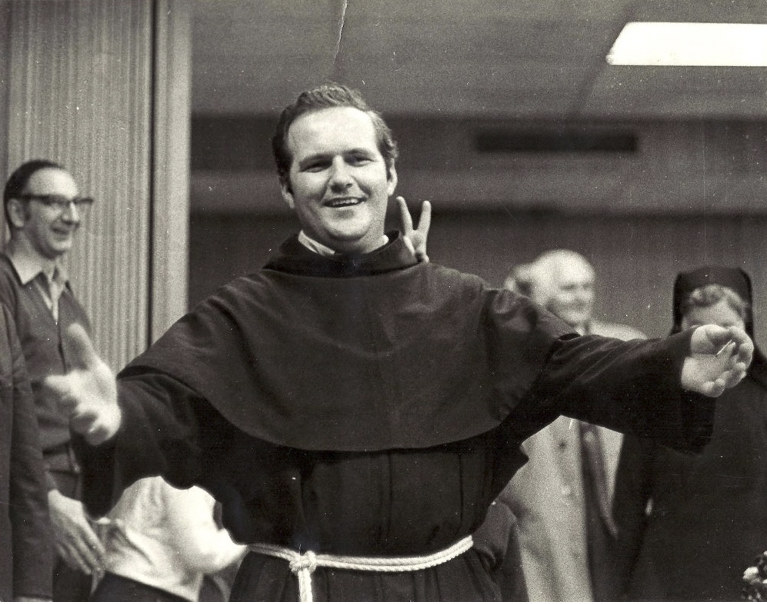 On June 25, 1975, Friar Casimir Cypher OFM Conv. drove his borrowed pickup into the city of Juticalpa for repairs. He was unaware that the National Union of Campesinos had organized a demonstration that day for better implementation of land reform legislation. Hearing gunshots, Fr. Casimir ran toward the commotion.

Knowing that he was a priest, soldiers arrested him. He was stripped in the town square, ridiculed, and beaten. Along with another priest, Fr. Ivan Betancort, two of Fr. Ivan’s companions, and ten campesino leaders, Friar Casimir was brutally tortured and executed. His body and those of the others killed with him were then thrown into a deep well and dynamited in an attempt to cover up the massacre.

Friar Casimir was only 34 years old.

He was born in Medford, Wisconsin, in 1941. He entered the Conventual Franciscan Friars’ Minor Seminary in Crystal Lake, Illinois, and was ordained a priest in 1968. After serving as a parish priest in Rockford, Illinois, and Hermosa Beach, California, Fr. Casimir received permission to fulfill his long-time dream: serving as a missionary.

Arriving in Honduras in 1973, he served in the remote and rugged state of Olancho – the “Wild West” of Honduras. Soon afterwards, Friar Casimir (or “Padre Casimiro” as the local villagers called him) was caught up in the violent storm of unrest.

For some time, the oppressed peasant farmers (or “campesinos”) had been organizing for land reform, much to the anger of the military dictatorship then ruling Honduras, and their wealthy, land-owning supporters.

The Catholic Church supported the campesinos in their struggle for justice, leading to a nation-wide persecution of the Church. The military searched churches and retreat and catechetical centers throughout the country, seized radios, and arrested priests, religious, and laypeople working with the Church.

The night of June 25 is honored in Honduras as the “Los Horcones” Massacre (or “Pitchforks,” after the name of the ranch on which the killings took place).

Friar Casimir was a true son of St. Francis. His life was characterized by simplicity, personal poverty, and a good sense of humor. He painted, wrote poetry, and loved serving the poor and disadvantaged. May his example inspire us to love and serve Christ in the poor and marginalized!

Dante and the Franciscans – Part Three