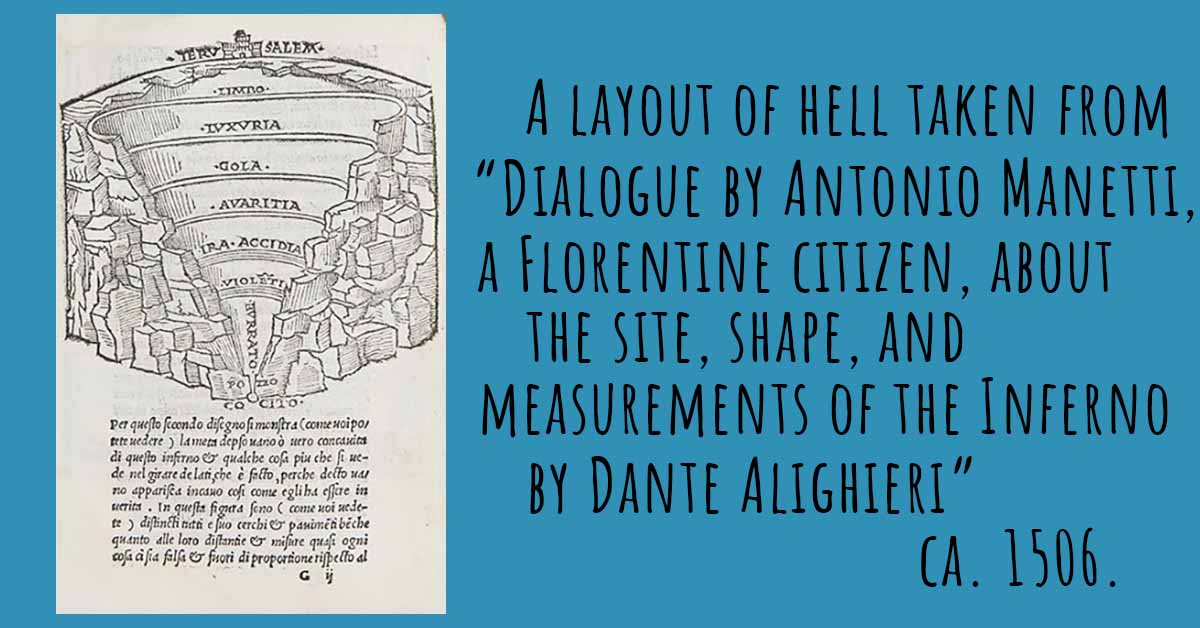 Dante and the Franciscans, Part Five

Journey into the realms of the afterlife was not a new story in literature. It had occurred most famously in the Aeneid, written by Virgil, whom Dante revered and who becomes his guide through the first part of the Commmedia.

But Dante’s underworld was something completely different from previous stories. He created a structure for the afterlife that didn’t exist before, giving Hell and Purgatory actual geographic locations. This is combined with a historical actuality that underlies the whole poem. It is told as a real event, a story of travel to real places.

In addition to historical meaning of the geographic locations Dante uses, there is the arrangement of sinners who are grouped following a precise gradation of penalties. Dante and Virgil descend a funnel narrowing its way through three different regions (the incontinent, the violent, and the fraudulent) as they approach the center of the earth where Lucifer is kept.

This is no dream or vision. It is a real journey that was so remarkable to readers of Dante’s time that when they saw his dark complexion they said to one another: “Look how black he is; he really was in Hell!”

But perhaps Dante’s greatest achievement is his depiction of the people suffering in the Inferno. They are not entirely despicable, retaining the image of their Creator, which cannot be taken away. They preserve human dignity and moral conscience, both signs of God’s image. Most recognize their own guilt and the justice by which they are punished.

The tragedy in the Inferno is that original greatness has been disfigured, and the inhabitants have no possibility of redemption. Each retains traces of the values of their lives, whether kindness, loyalty, or some other quality, but it is not enough to save them. But the pity that Dante feels for the condemned diminishes as he descends further and further until reaching the betrayers at the bottom.

Finally, the journey is one of purification for Dante and for the reader, at each stage urging us to let go of shackles that bind us to our past.

To read more, go to: https://www.ofmconv.net/en/iv-i-la-commedia/i