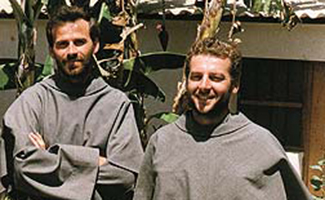 In August 1991 guerrillas of the Shining Path terrorist group escalated their violence against the Catholic Church in Chimbote, Peru. The terrorists announced that they would kill a priest every week in the Diocese of Chimbote.

On August 9, two Conventual Franciscans, Friar Zbigniew Strzałkowski and Friar Michał Tomaszek were taken from a village church at the end of the evening Eucharistic celebration. After a brief ‘trial,’ they were led out of the village and killed.

In 2015, Pope Francis gave approval for the beatification of the two friars along with Italian diocesan priest Alessandro Dordi.

We can look at death with hope

The Greyfriars in England – Part 3