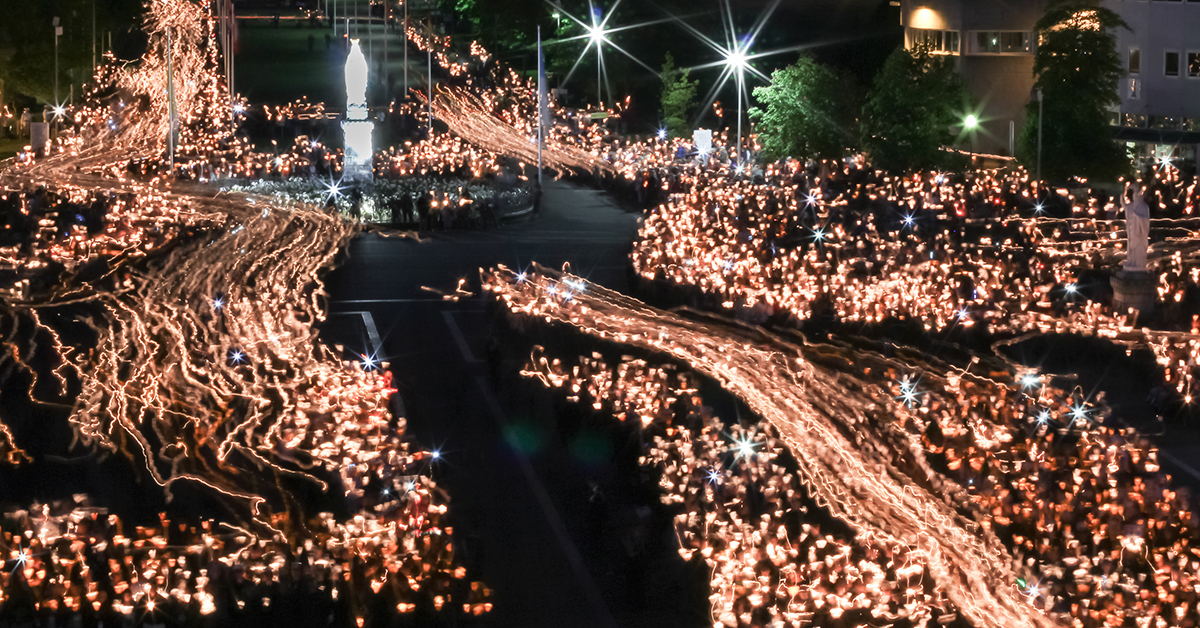 An evening vigil in Lourdes, France, where Mary appeared to St. Bernadette Soubirous in 1858.

We live in a world where ecumenism has become an important movement. I believe the drive for ecumenism was one of the prophetic voices of the Second Vatican Council. We Catholics must work alongside other religions – in particular the monotheistic religions – in bringing God back into a godless society.

There are some people who will say that Our Lady, devotion to Our Lady, is an obstacle to the ecumenical movement; that somehow she sets everything back; that she is a cause for division. Well, I can tell you that nothing could be further from the truth. I well remember one of my teachers back in the novitiate speaking on this particular point: he stressed that Our Lady is not a cause of division – she is our starting point. The words of a great teacher and theologian – and a holy priest too.

In light of the foregoing, it is comforting for us to hear the words of St. Maximilian Mary Kolbe, in a piece he wrote long before the Second Vatican Council – in 1935 to be precise [SK 1196]. Personally, I like to believe that if Kolbe had survived to see the 1960s, he would surely have been one of the Council Fathers. It’s a nice thought. Anyway, let’s listen to this piece he wrote over eight decades ago:

Clearly the author of that letter did not know that the Catholic Church does not venerate any saint as God, but only as faithful servants and friends of God. Moreover, she venerates Mary as Mother of God. And this not because she gave Jesus His divinity, for on her own part she only gave Him human flesh, but because, God, by becoming incarnate in her womb, really dwelt within her, and so, in this manner, she really generated the Man-God.

The difficulties pertaining to the veneration of Mary remain rather widespread amongst Protestants, but in that environment, also, there is now a progressive awakening of an ever-greater longing for a mother of the spiritual life.

Let us consider their own voices, which are being heard in various countries.

In Germany, for example, in the year 1919, the Protestant writer Jungnickel affirmed:

The Evangelical Church is dying of cold. We should take her to the Mother, to Mary. Then she will become warm.

The Protestant review ‘Hochkirche’ often expresses itself in the same terms. Moreover, some years back the Protestant pastor Lortzing of Gottingen published a booklet bearing the title ‘Marienblumen auf fremder Erde’, that is, ‘Marian Recollections in a Foreign Land’, in which the author names more than one hundred different Protestants who expressed themselves in favour of the devotion to Mary.

Last year, in November, an ‘Appeal to All Evangelical Christians’ was published in Cologne, openly demanding the restoration of the Marian devotion in the Protestant Church. The author reminds us that people honour the mothers of illustrious men, such as the mother of Goethe; the mother of the Gracchi brothers; St. Monica, mother of St. Augustine; St. Helen, mother of Constantine. It also names other women. It then concludes with this lament:

Only one woman is excluded, only one remains forgotten and abandoned: the Virgin Mary, Mother of Our Lord and Saviour.

Further down, the ‘Appeal’ reminds us that Luther himself celebrated the glories of Mary in many songs and that in the seventeenth century Brynjólfur Sveinsson, a Protestant bishop of Iceland, even composed songs honouring Mary in Latin.

In England, at the entrance to the Protestant church of Walsingham, the Protestant bishop Bertram placed an inscription commemorating the restoration of the church, which says:

This sanctuary, built in the year 1061 in fulfilment of a request by the Holy Virgin, Mother of God, in honour of the mystery of the Incarnation - during the reign of St. Edward the Confessor, lord of this place, which he governed for another 19 years - subsequently destroyed by a king possessed by a detestable love (may God have mercy on his soul!), has now been restored for the first time, in the year 1931.

In Holland, the Protestant Cor Meerensy published a publicity leaflet bearing the title ‘An Invocation to Mary’, in which he wrote:

We no longer have songs addressed to Mary; neither do we have shrines dedicated to Mary, nor images of Mary. Amongst us Mary is an evanescent, insubstantial phantom that appears only once a year. We Protestants still remain too bound to the Old Testament. However, no one can approach Christ, without receiving Him from Mary’s hands.

So intense is the longing for a mother.

And it is a rightful longing. If, in fact, wherever life is begotten and formed, the loving heart of a mother watches over it, why must not the life of Faith, the supernatural life, the life of Grace, the divine life feel the warmth of a maternal heart? Why must not we receive this life from God through a spiritual mother?”

Words from St. Maximilian that still hold true to-day. Our Lady is the Spiritual Mother of us all, and we all need her. Now here’s an evangelical and ecumenical tip for you: be willing to share something on the Blessed Virgin Mary with others, whether they be of any religion or of no religion.

A Spark of Hope Part 3