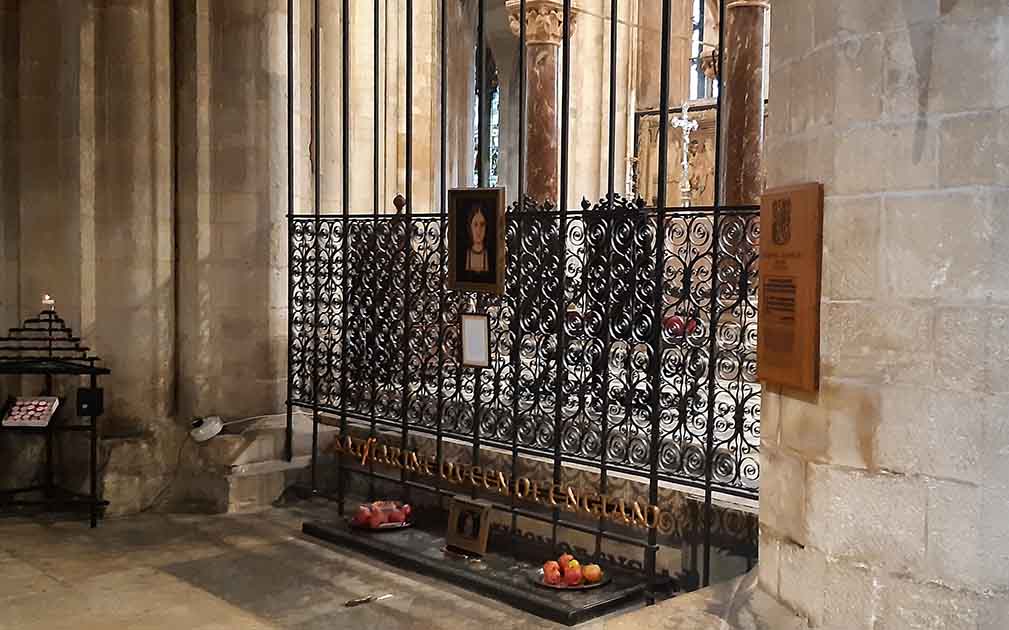 Friar Solanus Mary continues the story of Queen Katherine of Aragon, wife of the infamous King Henry VIII of England. (Click here, if you missed part 1)

Katherine bore all her sufferings with great patience. She was always very charitable in her dealings with Henry, as can be testified from her letters to him.

At the same time, Katherine was no weakling. She was a woman of fortitude. Not long after the separation – in 1534, to be exact – the King’s Commissioners came to Katherine presenting the Oath of Succession for her signature. Everybody was required to sign this Oath, by virtue of the Act of Succession (this Act affirmed that Katherine’s marriage with Henry was against God’s law). Katherine refused to sign the Oath, responding to the Commissioners:

“If one of you has a commission to execute this penalty upon me, I am ready. I ask only that I be allowed to die in the sight of the people.”

Katherine had been badly wronged in the whole matter, and she knew it. She sought justice, but she never sought revenge; rather, she was a woman of peace.

England’s break from Rome was yet another blow to Christendom. In 1535, just a year before her death, she wrote to Pope Paul III:

“I do entreat you to bear this realm especially in mind. Your Holiness knows, and all Christendom knows, what things are done here, what great offence is given to God, what scandal to the world, what reproach is thrown upon Your Holiness. If a remedy be not applied shortly, there will be no end to ruined souls and martyred saints. The good will be firm and suffer. The lukewarm will fail if they find none to help them, and the greater part will stray away like sheep without a shepherd.”

As a woman of peace, Katherine always sought means to avert a war. In the following year, 1536, she wrote to Chapuys (who was the Ambassador of Charles V, King of Spain and Holy Roman Emperor):

“I shall not ask His Holiness for war; that is a thing I would rather die than provoke.”

Katherine lived out her days of exile in prayer and penance, in the manner of a true Franciscan. She did not live for very long, dying in 1536. Henry refused her a state funeral in London. Instead, as the cathedral notice tells us:

“She was buried in a grand ceremony at Peterborough Abbey conducted by four bishops and six abbots, attended by noble mourners and lit by 1,000 candles.”

“Katherine’s tomb was destroyed in 1643 during the Civil War, but her body was undisturbed. In 1893 the ‘Daily Mail’ newspaper invited readers named ‘Katherine’ each to subscribe a penny, which paid for the marble slab you now see.”

During the last century, Queen Mary, consort of King George V, had Katherine’s tomb upgraded. And even up to the present day, there is a procession held in the cathedral every January to mark the anniversary of Katherine’s burial. In all my visits to this cathedral I’ve never seen Queen Katherine’s tomb undecorated with flowers – I’m told that people regularly leave flowers upon it (or pomegranates, Katherine’s heraldic symbol).

To-day, next to Katherine’s tomb, there is a tablet, inscribed with the words:

“A Queen cherished by the English people for her loyalty, piety, courage and compassion. This tablet was erected by the citizens of Peterborough on the 450th anniversary of her burial. January 29th 1986.”

Oh! if only Henry had listened to his holy wife: he probably would not have met the miserable end he did meet, and the course of English history would have taken a completely different turn for the best.

On a personal note, I must say that for me the tomb of Katherine of Aragon is probably the most moving place I have visited in England. I do hope that one day this saintly Queen will be raised to the altars. I think she would make a great Patroness of Matrimony.