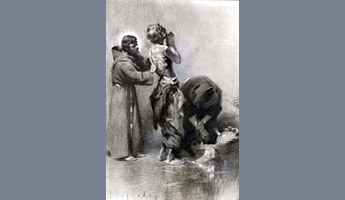 For we who are inspired by St. Francis and St. Clare, Pope Francis’s encyclical, Fratelli Tutti, speaks to us with the familiar words of our patrons and resonates with the Franciscan values in our hearts. The encyclical’s message is thoroughly a Franciscan message. Released this past weekend in Assisi, on the Feast of St. Francis, His Holiness lifts up our Franciscan charism as balm for all that is broken or wounded in the social, economic, and political life of the modern world.

The encyclical is long but its message is clear and compelling. Our life together in civilization is fraying before our very eyes. “Ancient conflicts thought long buried are breaking out anew, while instances of a myopic, extremist, resentful and aggressive nationalism are on the rise. In some countries, a concept of popular and national unity influenced by various ideologies is creating new forms of selfishness and a loss of the social sense under the guise of defending national interests….” (Par 11)

What behind this? Our society, our economics, and our politics are infected with structural sin. That sin takes different forms: an individualism that presumes nothing is owed to others or to the community, a faceless economy that rewards greed for private property, and a polarized politics that divides citizens from the common good. The centrifugal character of this structural sin erodes the bonds of solidarity, fraternity, and community – undercutting the divinely ordained, relational nature of human life and dignity.

Regarding individualism, Pope Francis blames “[a] kind of ‘deconstructionism,’ whereby human freedom claims to create everything starting from zero, is making headway in today’s culture. The one thing it leaves in its wake is the drive to limitless consumption and expressions of empty individualism.”(Par 10) We are fooled, however, because such individualism “does not make us more free, more equal, more fraternal.” The disease of “radical individualism is a virus that is extremely difficult to eliminate” because “[i]t makes us believe that everything consists in giving free rein to our own ambitions….” (Par 105).

Regarding the economy, the pontiff refers to Pope John Paul II’s argument from Centesimus Annus that Christianity “has never recognized the right to private property as absolute or inviolable.” (Par 120) Property must always be understood for its contribution to the common good and to the final end in salvation. Like all things, property is the Creator’s, something we hold only as the Creator’s stewards and which is ultimately destined to be returned to God. Pope Francis is particularly critical of ideologies that make a fetish of so-called “free” market forces. “The marketplace, by itself,” the pope explains, “cannot resolve every problem, however much we are asked to believe this dogma of neoliberal faith. Whatever the challenge, this impoverished and repetitive school of thought always offers the same recipes…. simply reproducing itself by resorting to the magic theories of ‘spillover’ or ‘trickle’ – without using the name – as the only solution to societal problems.” (Par 168)

Regarding politics, Fratelli Tutti notes that radical individualism leaves the citizen alienated, lonely, and fragile. Yearning for protection and a sense of belonging, such citizens are prey to “populist” leaders who appeal “to the basest and most selfish inclinations of certain sectors of the population. This becomes all the more serious when, whether in cruder or more subtle forms, it leads to the usurpation of institutions and laws.” (Par 159)

The structural sin behind these dire diseases of our current world is not one that can be remedied with fundamentalism, judgementalism, or other allegedly “religious” attempts to build walls, create division, and close hearts. Desperately needed in our contemporary world are the very Franciscan values of fraternity and solidarity that transcend such closure. The Franciscan charism is the balm to heal division and overcome the separation and polarization that divides us from relationship with each other.

The encyclical asks all to reflect on the parable of the Good Samaritan. The unhealthiness of our society is evident when, like so many do in the parable, we turn our back on those who are suffering to focus on our own interests and wants. We are called to be in relationship with one another, to be co-responsible for building a society of good Samaritans that is able to include, integrate, and care for those who have fallen or are suffering. A society of infinite bridges and open hearts, not of walls and closed hands. Pope Francis calls on us to be like the good Samaritan in our dealings with refugees and migrants. He begs Christians to recognize Christ in the face of all who are excluded, caged, trafficked, discriminated against, marginalized, or oppressed.

Pope Francis refers to St. Francis again near the conclusion of the document. “In these pages of reflection on universal fraternity,” he writes, “I felt inspired particularly by Saint Francis of Assisi, but also by others of our brothers and sisters who are not Catholics: Martin Luther King, Desmond Tutu, Mahatma Gandhi and many more.” (Par 286) Yet for those us who have a Franciscan heart, we are reminded why Cardinal Bergoglio took the name he did and, with him, we too believe that St. Francis still illuminates the way forward for today’s Christians.

Peace and all good!