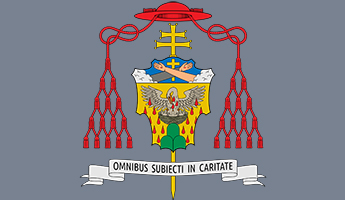 Friar Sławomir Gajda OFM Conv. interviewed Cardinal Gambetti on July 8 at the Friary of the Twelve Holy Apostles in Rome.

It has been nearly 160 years since the last Conventual Franciscan was created a Cardinal. The last one was Antonio Maria Panebianco (1861.) Friar Sławomir felt lucky to see ‘our cardinal’ and to speak with him.

The interview includes Cardinal Gambetti’s vocation story, as well as his attraction to the Franciscan charism.

“What aspects of Franciscan spirituality impress and fascinate you?”
“I have always been fascinated by Francis’ freedom, which I think came from his recognition of God as both Absolute and Infinite Tenderness. I was also impressed by Franciscan humility and simplicity, the attentiveness to the people, especially the poor, and that dialogic style that expresses respect and welcome and helps build fraternal relationships and peace.”

The full interview is available on the Order’s website: ofmconv.net

United in Prayer for the Ukraine