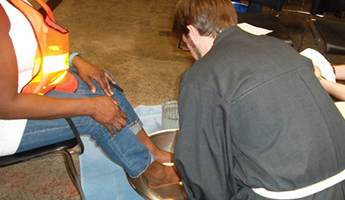 On Holy Thursday, many Catholic Christians gather for an Evening Mass of the Lord’s Supper, commemorating the Passover feast of the Jewish people and the Last Supper of Jesus with his disciples. At the Last Supper, Jesus washed the feet of his disciples, giving them an example of love and service. In the second reading at this Mass, St. Paul, in the first letter to the Corinthians (1 Cor 11: 23-26), addresses the topic of the Eucharist similarly to the way the evangelists Matthew, Mark and Luke do in their respective (synoptic) accounts of the Gospel.

…the Lord Jesus, on the night he was handed over, took bread, and, after he had given thanks, broke it and said, “This is my body that is for you. Do this in memory of me.” In the same way also the cup, after supper, saying,  “This cup is the new covenant in my blood. Do this, as often as you drink it, in memory of me.” For as often as you eat this bread and drink the cup,  you proclaim the death of the Lord until he comes.
1 Cor 11: 23-26

As Catholics, that is exactly what we believe – that we receive the body and blood of Christ. Yet, for the Gospel reading at this particular Mass, the Church brings in John’s version of the Last Supper, which is totally different, yet every bit as valid as the other Gospel accounts. John doesn’t have Jesus taking the bread and wine, blessing them, and giving them to his disciples. Rather, John has Jesus getting down on his hands and knees and washing feet, which was an act that a servant would do. Historically, if a host invited a guest to their home, the servant would be in charge of making sure that the guest’s feet were washed. So, Jesus is both host and servant.

The way I see it, Holy Thursday gives us a broader view of what Eucharist is; for me, Eucharist (from the Greek εὐχαριστίας or “eucharistia”, meaning thanksgiving) is both a noun – something we receive – but also a verb – something we do. Jesus says, “Do this in memory of me.” So, what do we do in memory of Jesus? Obviously, we continue to celebrate the Eucharist, employing those words of institution, but I contend that to do this in memory of [Jesus], we have to consider everything that Jesus did – both that day and other days. During his years of ministry, he reached out to those on the margins – the lepers, the blind, etc. – to the point of reaching out to the Samaritan woman. That was not kosher, so to speak; one was not supposed to do that.

As Catholics, we do this in memory of [Jesus]… we don’t go to Mass and just receive a host and a sip of wine. If that’s all we do, then we practice an empty religion. Religion has to put us in contact with the Suffering Christ. The Suffering Christ is found in people in jail, people living under bridges, (im)migrants, and everybody who is rejected by society at large. At the Evening Mass of the Lord’s Supper, we come together to celebrate who we are as sons and daughters of God, following Jesus. It is easy and very pleasant to stay in Church singing nice songs. Though instructive, it is only a good thing as long as it impels us outward. So, to the extent that we do that, I believe that we are do(ing) this in memory of [Him].

A Pilgrim on a Journey of Peace

Dante and the Franciscans – Part One