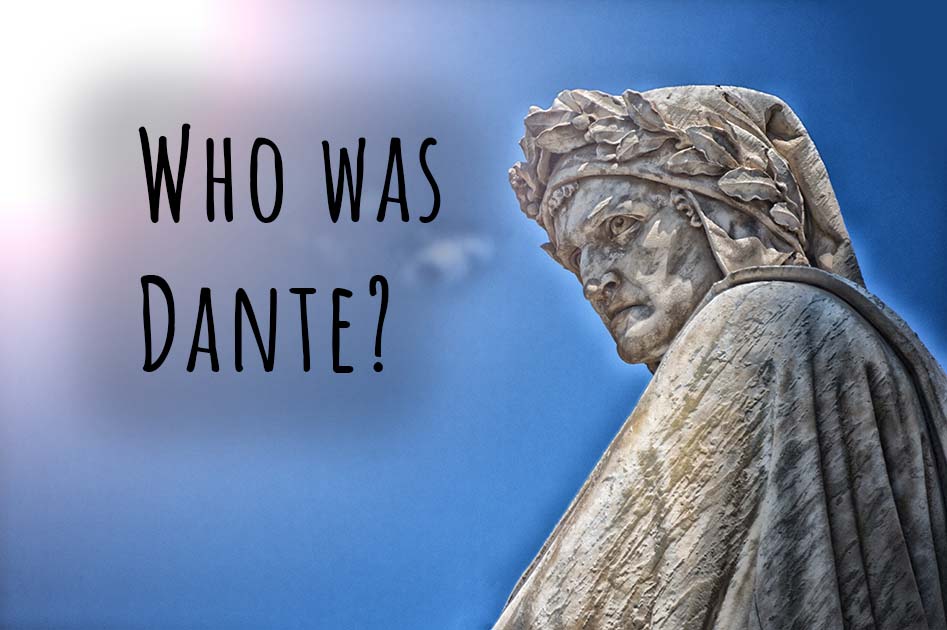 Born around 1265 in Florence, Dante Alighieri was orphaned at an early age. His inheritance, however, allowed him to devote himself to his studies, then embark on a career in public life. He married around age 20 and raised four children.

But a key event in his life took place in 1274, when he was only nine: he met Beatrice, with whom he fell madly in love. He wrote poems praising her beauty and grace and the modesty of her gestures. Though she died at an early age, she remained Dante’s muse for the rest of his life, and is a central figure in the Divine Comedy.

Her death in 1290 threw Dante into a profound spiritual and poetic crisis. That same year, he began attending “schools of the religious Orders,” specifically the Conventual Franciscans of Santa Croce to study St. Bonaventure and the Dominicans at Santa Maria Novella to study St. Thomas Aquinas.

He was a member of three different Councils in Florence, and was elected for a two-month term among the Priors, the highest governing body. But his political career played out in the midst of fierce factionalism. His siding against the more aristocratic side (which had the support of Pope Boniface VIII) led to his being sentenced in absentia, resulting in a fine, confinement, and a lifetime ban from public office. Refusing to submit, he was condemned to burning at the stake.

Thus began the exile that eventually brought him to Ravenna. Exile became the foundational topic in his poetic work. Emilio Pasquini writes:

If there is anything that is beyond doubt in the assessment posterity has made of Dante, it would certainly be the importance of exile in his life; the fact that it marked a decisive turning point in the existence and work of our author.

In the artistic process, bitter anguish and heart-breaking nostalgia for home lead to a melancholy acceptance of wandering. But by focusing less on one’s individual pain, exile becomes a universal symbol of humanity uprooted from the Divine.

In the next installment, we will begin to examine Dante’s works.

An International Friary for a Global Order