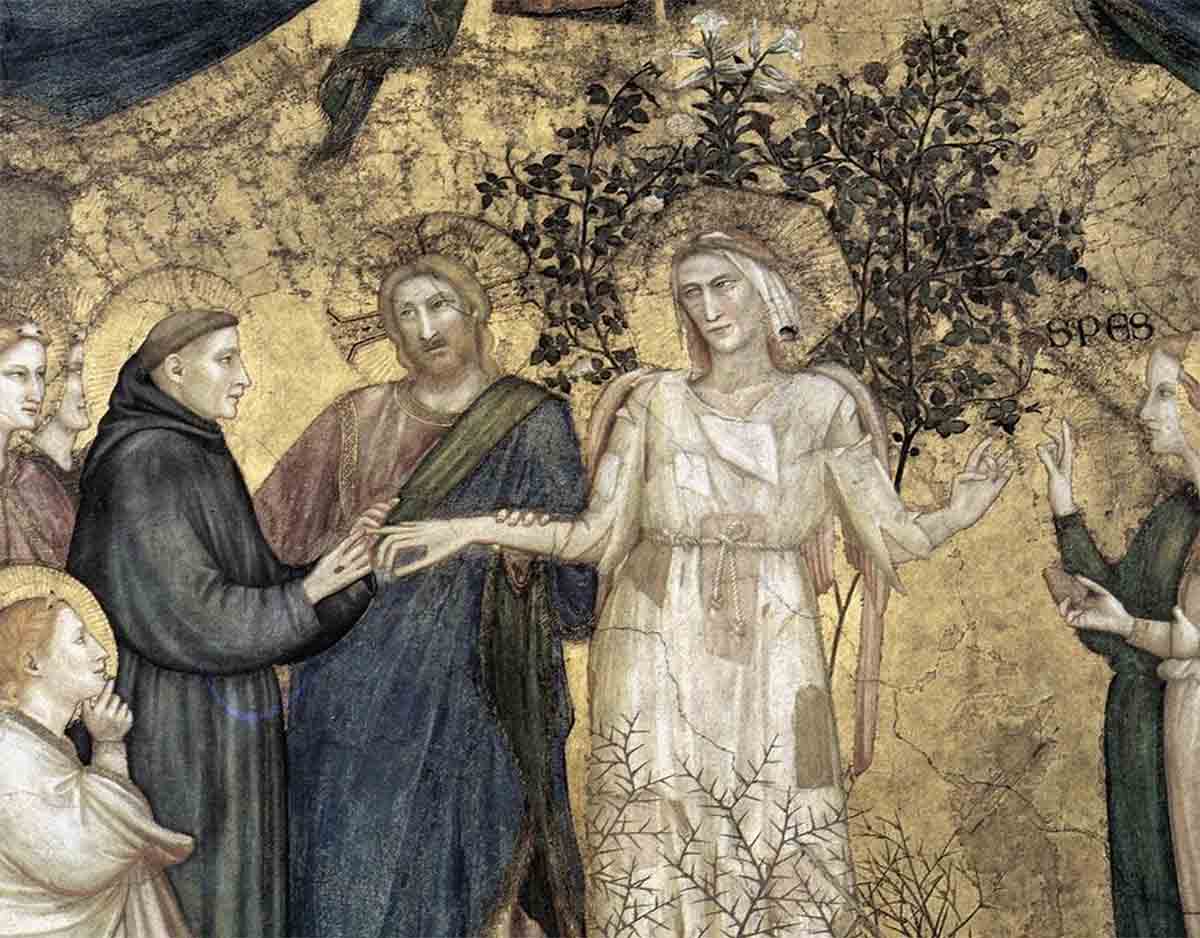 In the course of his life, Francis was alone, in deep thoughts, meditating,
with multiple and profound questions that assailed his heart.
He walked with leisurely steps contemplating the life around him,
but nothing captivated him, nothing that was not his Lord.

He reflected as he walked through the streets of the walled city where he grew up,
and when passing by, more than one person recognized the Holy Man,
since on many occasions he had walked those streets like a great Troubadour
with songs that he had sung full of emotion.

But now the Troubadour’s condition was different,
for he had left the world to reach eternity.
He had abandoned prestige and familiar comfort
to be free and bet on the heavenly.

In times of the world the noble Man had been claimed
and, although the suitors were very close to him, in his wanderings;
none managed to inhabit his heart
because his Tabernacle was reserved for an Eternal Love.

He met a Lady who, in the eyes of many, lacked attraction;
She was a maiden with singular purity and elegance
that Francis contemplated with the eyes of his soul
and being amazed, the Poverello, acted so that she would notice him.

With all gentleness, the Troubadour of God, approached to greet her
and she, like a noble maiden, attentively reciprocated.
Oh the wonder of an unusual encounter, a transcendent encounter,
where a lady and a gentleman of different royalty … coincide.

Sharing to get to know each other, they talked and laughed together
like two kindred souls who coincided on their desires.
And although for many they seemed misplaced,
it was a joy for them to know that they were loved by the Most High himself.

The Man of Assisi was looking for her to walk by his side,
because when he saw her, he contemplated in the Maiden the grace of heaven.
Francis had no doubt that he had known her through Holy Providence,
so he wanted to be, in her, an offering for the Eternal Beloved.

As time passed, the liking between the two grew,
to the degree that their heartbeats matched
Clearly it was love for the Lady, what Francis felt inside,
and she, between sighs, felt loved by a Knight that God chose for her.

She liked all the things that Francis told her about her Lord,
because the same Lord who was for her, was also for the humble Man.
That greatly enchanted the Knight,
having the same longing for her, the same God.

The blessing that the Poverello had found
as his companion on the way to The Way,
since for her it was nothing alien to where she would guide him,
her heavenly task was to take him towards the Supreme Good, the Total Good.

By undertaking their daring journey, Lady and Knight together,
were the mark to attract hearts to the Good News of the Crucified;
from humble peasants who did not know letters or manners,
to important and refined families such as the Ofreduccio and the Settesoli.

Like an unparalleled couple, Francisco and the noble Lady traveled various places together.
They visited distant regions of powerful cultures and different creeds,
and also humble regions where they celebrated a beautiful birth with the people.
All of these were experiences that further united the emissaries of the Eternal King.

Something that she loved to see was how her knight loved the Beloved’s creatures.
He saw how the animals were participants in his tenderness,
how his sensitivity was inflamed before the varied plants and the perfume of the flowers,
and he did not miss an opportunity to contemplate the Creator in his hierophan presence.

Many signs like these showed the grace they were both in,
a grace that purified and molded them with great intensity.
This phenomenon of intimacy has been named in many ways,
but the most precise word is… Holiness.

This intimate union that Poverty and the Knight had
was nourished day by day from the Divine Source where it had arisen;
For this reason it was not unusual for their praises to get up early to await the dawn of the Lord,
and their prayers continued to illuminate regardless of the setting of the sun.

During one Lent, the Poverello went up to a mountain where he used to pray,
while he prayed to the Supreme Good, his Lady and one more brother accompanied him.
In that place, Francis exuded love with all his being.
Every heartbeat, every sigh and exhale, became a prayer for his Beloved.

What infinite glory and grace that Francis received from on high;
Wherever he was flooded with charity, with a mixture of deep tenderness and sublime humility,
he was visited by the Light of light, by the Love that is above all love,
because the very Pure Grace, winged like a Seraphim, appeared before him.

What a Great Wonder, what a tremendous, fascinating and august mystery,
to have contemplated the Author of everything, the One who had given him his Image and Likeness.
For that Same One was before the poor Man to resemble him again with greater closeness,
replicating in the Poverello his limbs and side as a gesture of reciprocated love.

After being wounded, the Knight, with bodily displays of blessed love,
was wrapped in arms by the Poor Lady who had witnessed it all.
And, while the brother who accompanied him continued to be disturbed and paralyzed by astonishment,
the Troubadour of God, only continued saying: “My God and my All, my God and my All…“.

The poor Lady had led the Holy Knight towards a sublime manifestation;
towards an external confirmation of what God was doing within the Man;
and having achieved that the very precious container was filled with Divine favor,
there was nothing left but to also impregnate those around him, with the same grace from heaven.

Here is the work of her Maiden, here is the work of the humble Lady,
accompanying the lover to strip him of the ephemeral desires;
to cleanse the being, doing and feeling of the fortunate host,
and preparing in him a dwelling with poverty of spirit to receive the Eternal Beloved.

All were witnesses of what Francis and his Lady professed,
the Good News that they shared, passed on to their fellow men,
to the extent that the birds, as a group, received it, as inspiration to their melodies
and just as they enjoyed, also enjoyed the one who lived in Gubbio.

Beautiful was the work that the beloved couple proclaimed without measure;
and, although the Poverello knew that his passage through this life was temporary,
he only took his companion by the hand and fixed his gaze on Eternity
with the certainty that the One who is Life awaited them at the end.

There were many wonders that the Heavenly Father manifested through them,
the work that Francis carried out in the name of his Lord was great,
because the grace of the Spirit was the One who accompanied them in the divine work
that Knight and Lady carried out to extend the commandment of Love.

In praise of Christ and his servant Francis. Amen.