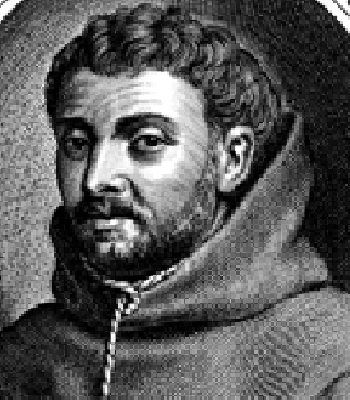 The friary to which I am assigned at present is located in Barton, a place that is historically part of the county of Lancashire. This county, in the north of England, is home to many of the English martyrs for the Faith – priests, religious and laity alike. In this post I want to take a brief look at the life of one of those martyrs, a Franciscan; he was born in, and died in, the county of Lancashire: Blessed John Woodcock.

Not too many miles away from Barton lies the town of Preston. The Franciscan Order has had a large presence in Preston’s past history. In his book A Procession of Lancashire Martyrs and Confessors [John S. Burns & Sons, Glasgow, 1958] the Jesuit, Fr. John A. Myerscough, tells us that

“After the Reformation and all through the penal period, St. Mary’s, Friargate, was the mother-chapel of Preston. The locality was formerly the site of a much larger religious establishment consisting of the conventual buildings of the Franciscans, until the suppression of the monasteries and religious houses. The name ‘Friargate’, however, has remained and it is apparently more than a mere coincidence that the locality contained a spot that was reserved for the little chapel, from which in course of time the other Catholic parishes in Preston have either directly or indirectly originated.”

Sadly, nothing remains to-day of these Franciscan buildings. The aforementioned St. Mary’s Church in Preston was built in 1761, but destroyed by an anti-Catholic mob two years later. The church was rebuilt twice and destroyed twice by similar mobs, the final time as late as 1852.

The town of Preston enters into our story of Fr. John Woodcock, as we shall see.

John Woodcock was born in 1603 (the year in which Queen Elizabeth I died) at Woodcock Hall in Leyland, Lancashire. We are told that his parents were middle class. His father had lapsed from the Catholic Faith and embraced the State religion, but his mother had remained a good Catholic. It seems that under his father’s influence the boy was brought up as a Protestant. Possibly to counteract this influence, his mother entrusted the young John into the care of her own father, a good Catholic, in Clayton. Later, when he was old enough, John embraced the Catholic Faith. We are told that John’s father did not take kindly to his son’s conversion, and he began to treat his son in a cruel manner.

The Jesuits did much work in England to keep the Catholic Faith alive during those troubled times. Many of them are numbered amongst the martyrs. It was a Jesuit, Fr. Edward Squire, who took young John under his care. Fr. Squire arranged for him to travel to the Jesuit College of St. Omer’s in Belgium. After a year at this college, John went on to the English College in Rome for priestly studies.

After a while, John discerned that he was being called to the religious life – to the Franciscan Order, in particular. He approached the Capuchins in Rome, and they referred him to the Capuchin friary in Paris, France – it appears that, somehow, they mistook that friary for an English-speaking community. John entered the Capuchins in Paris, but it did not work out: he was dismissed from the Order after only three months.

We stress that John’s dismissal was brought about through no fault of his own. His family – even his mother – were strongly opposed to him entering religious life, and this had come to the knowledge of the Capuchins. The Order considered that this, along with his Protestant background, might cause future difficulties for him. In addition, they were concerned that John’s health was not robust enough for their way of life.

John was devastated at his dismissal. However, as the saying goes, God writes straight with crooked lines. The Capuchins had no mission in England at that time: if John had remained in the Capuchins he would have missed out on the opportunity to win the crown of martyrdom.

In Part Two – Blessed John Woodcock’s entry to the English Franciscans, his ordination, and his mission to northeast England