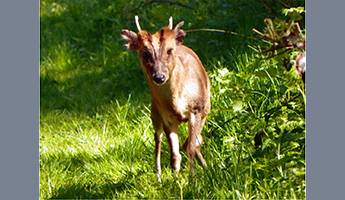 One of the wonderful aspects of the city of Oxford, England, is the existence of green spots, both cultivated and uncultivated, where nature really comes into her own. The wildlife which thrives on the riverbanks and the flood plains sometimes spills out into the city itself, and the beautiful grounds of our friary receive its fair share of visitors. One beautiful and elusive guest in our gardens has been the little Muntjac deer. These miniature deer were brought from their native habitat in Asia in the twentieth century to be ornaments on a country estate. They got loose and ever since they have increased and multiplied. (They are an invasive non-native species in England and Wales known for causing damage to trees and crops.)

We started seeing our new neighbour as we would walk the grounds saying the community rosary. He would often be enjoying the shade of a certain tree and would then dart out at our approach. He was so quick that we were never able to get a photograph of him. So, unfortunately, we cannot show you exactly how our neighbouring Muntjac look. However, it spurred on Friar Andrew and me to try and find a few Muntjac deer in some of their other well-known haunts in Oxford.

My beloved is like a gazelle or a young stag. Behold, there he stands behind our wall, gazing through the windows, looking through the lattice... Song of Sg 2:9

The discerning eye will note that these deer are much larger than the muntjac deer we were seeking. Still, as the old Gaelic proverb goes, “Faigheann iarraidh iarradh eile”: The seeking of one thing finds another!

“Almighty and everlasting God, mercifully look upon the devotion of this people called to a new birth, who, like the hart, seek the fountain of your waters: and mercifully grant that the thirst of their faith may, by the mystery of Baptism, sanctify them in body and soul. Through Christ Our Lord. Amen.”