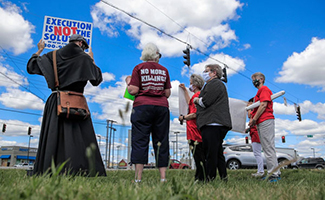 A hammer crashes into the side of a rusted bell on a stand. Those gathered take turns to toll the death knells for a federal execution as it occurs at the prison across the street. We then return in silence to stand in vigil with our signs pleading to end the death penalty. This is the scene of the latest protest against capital punishment in Terre Haute, Indiana, as Keith Dwayne Nelson was put to death.  (This article was written in August 2020.)

In the last two months the United States carried out five federal executions in Terre Haute. Daniel Lewis Lee died by lethal injection on July 14 at 8:07 a.m. Wesley Ira Purkey was pronounced dead at 8:19 a.m. on July 16. Dustin Lee Honken’s execution was carried out the following day, and he died at 4:36 p.m. Lezmond Mitchell, the only Native American on death row, was declared dead at 6:29 p.m. on August 26. And Keith Nelson was executed two days later, dying at 4:32 p.m.

There is no denying that each of these men committed heinous crimes, all of which involved the deaths of children or teens, and there is no excuse for their evil actions. But the fact still remains that, in the name of the state – you, me, and this entire country – five men have been consciously and willfully killed this summer. Although they perpetrated egregious murders and other atrocities, their own unnatural deaths are on the hands of the nation, and as citizens we share in it.

I attended Death Penalty Resistance protests for most of these men’s executions. Both Daniel Lee’s and Wesley Purkey’s executions were delayed until early the following morning after they were scheduled. Lee’s was temporarily blocked due to “ongoing challenges to the federal government’s lethal injection protocol.” (CNN) Purkey’s was delayed because of appeals regarding his mental health, including Alzheimer’s disease, dementia, and schizophrenia. I could not attend a protest opposing Lezmond Mitchell’s death, but I was able to participate in the vigils for the executions of Dustin Honken and Keith Nelson at the exact times of their deaths. These were especially solemn and sobering occasions.

Compared to other pro-life demonstrations I’ve participated in, which tend to focus on opposition to abortion, these were markedly different. For one thing, there were fewer of us, which could partly be due to the current pandemic and initiatives for social distancing. There was no chanting or much movement; we just quietly displayed signs at a busy highway intersection or on a corner relatively close to the penitentiary. The responses by motorists varied. Most people were indifferent, though we did receive supportive honks and thumbs-ups from many passersby. Of course, there were just as many folks giving us thumbs down, and usually it was a more obscene hand gesture. Plenty of people shouted from their vehicles, “Kill him! Kill him!” “Eye for an eye!” “He’s getting what he deserves!” or any number of various expletives. 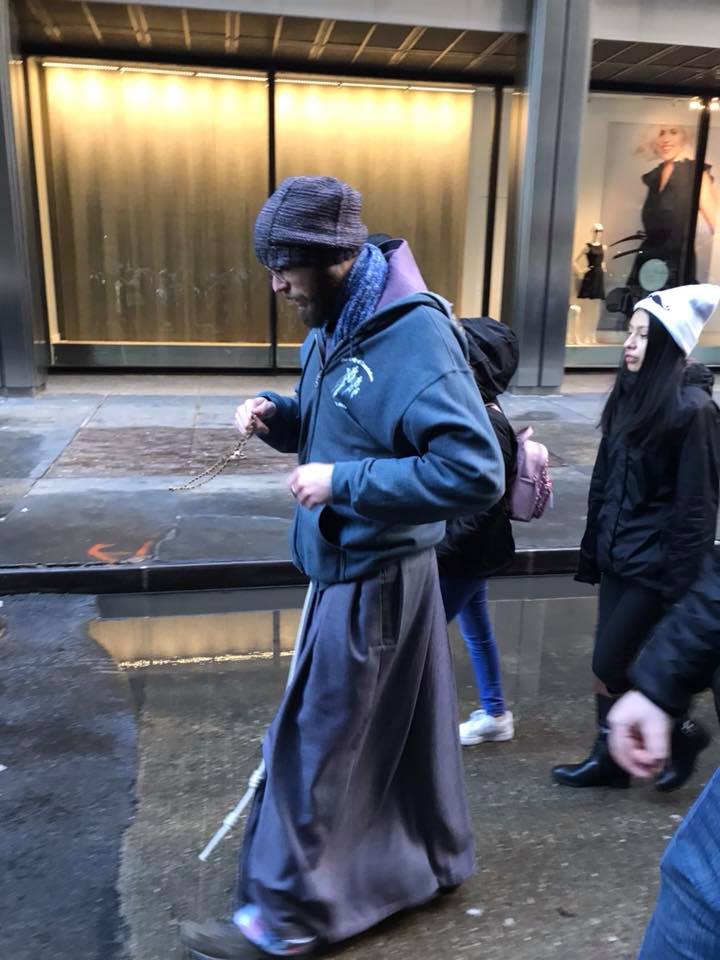 I had experienced counter-protesters at pro-life marches before, and though they may have shown their annoyance or even anger at our cause, they were not typically so belligerent. Moreover, their oppositional stance never appealed to an explicit desire for death. Yet I found the gratification for the blood of these men expressed by so many on the roadway jarring and disconcerting. Yes, they had all committed unspeakable atrocities, crimes that would naturally spawn outrage, but what does that say about us when death becomes satisfying or even a cause for rejoicing?

I couldn’t help but be reminded of another crowd two thousand years ago in Jerusalem crying out for a man’s blood. It would seem that sacrificial violence is still an iniquity from which we need salvation today. One protester, whose father had been a victim of a state execution, came all the way from Alabama to be present for this demonstration. In his impassioned speech he said that if Jesus’ blood had cleansed us once and for all, then the death penalty raises the question, ‘What was it all for?’ Do our actions suggest that some people are beyond the saving power of God?

We forget that capital punishment is, indeed, putting an end to another person’s life. It is an actual killing. Instead we think of externals. That man was a perverse murderer. Now justice has been done. Now we are protected from him. Meanwhile there is a dead body strapped to a gurney. A similar attitude pervades our consciences when a black person is the victim of a police shooting. They must have been doing something wrong. Why didn’t they just listen to the cops. Police officers are victims of violence, too. Meanwhile, there is a man who’s been shot multiple times lying in the street.

Perhaps one of the Beatitudes we need most right now in our society is “Blessed are those who mourn.” We have forgotten how to mourn, how to feel genuine sorrow and grief at the death of another human being. Instead they become numbers, statistics, hashtags, sacrificial scapegoats. We become angry (and perhaps rightfully so), or we become defensive, distancing ourselves even further from the carnage we find inconvenient in our privileged worldview. Either way, no tears are shed. No grief is felt. Our hearts are not pierced nor softened by the loss.

Beside the social stance against capital punishment, I attend these vigils and protests after the pattern of Mary, John, and the other women who stood at the foot of the cross. They lived “Blessed are those who mourn,” because they could not say or do anything to prevent the execution of their son and friend yet would not run and hide their faces from his violent death.

We may feel powerless in the face of the death penalty, war, pandemic, police brutality, but perhaps what we need is to mourn. Like the Blessed Mother, we need to have our hearts pierced and broken, not hardened. It is the heart which is wounded that is made sensitive to the humanity in the other person. It does not seek justification for death nor retribution through it, but instead the grieving heart breaks the chain in the cycle of violence.

In this, those who mourn will be blessed, and they will be comforted!