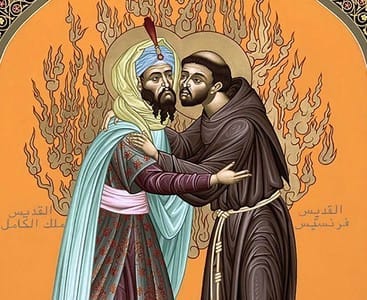 It was to be my first Iftar, the sunset meal that breaks the Ramadan fast. Alex, our host for the evening, emerged from the kitchen with a platter of goat-cheese-stuffed dates. We all politely took one and Alex disappeared back into the kitchen.

Alex’s connection to the Franciscans began when he was a young adult on a tour of Italy. In the Basilica of Saint Francis, he had decided he’d seen enough churches to last him a lifetime. Slowly distancing himself from his group, he turned to look for the closest exit when his eyes fell on the fresco of Saint Francis and the Sultan Malik al-Kamil. A Muslim, he was drawn toward the familiar image.

In 1999 Alex co-founded Unity Productions Foundation (UPF). Its mission “is to counter bigotry and create peace through the media.” A number of Franciscans collaborated with UPF in the production of the film, The Sultan and The Saint, which tells the story of the meeting between Sultan Malik al-Kamil and Saint Francis of Assisi.

Consider for a moment how many books and films have portrayed the Sultan as an evil leader who experiences the grace of transformation through the intercession of St. Francis. Some sources even go so far as to tell of the Sultan’s later conversion to Christianity. This one-dimensional story telling is supported by the fact that most everyone commonly refers to the encounter as “The Meeting of St. Francis and the Sultan.” The “bad guy” doesn’t even have a name; it would risk his being seen as a multidimensional person.  It took a Muslim filmmaker, with some Franciscan friends, to risk telling the story again and re-introduce the world to the Sultan of Egypt, Malik al-Kamil.

A simple Christian friar named Francis and a beleaguered Muslim ruler, al-Kamil, in the midst of the Crusades chose to ignore the immoral stories each side was telling about the other. They met and told different stories of multidimensional people of faith, whose stories began long before battle lines were drawn and would continue after the fighting ended. Francis and al-Kamil met each other with the virtue of compassion.

On the day of the summer Iftar, some in our small group of Franciscans decided to show solidarity by spending the day fasting like our Muslim sisters and brothers. It was a way of bringing the act of fasting, found in both of our traditions, to the forefront of a shared friendship.

Visit With Our Friars in Lviv, Ukraine