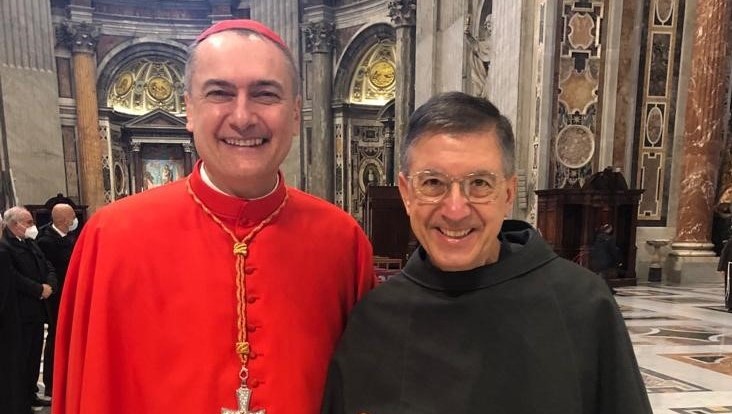 Due to COVID-19 worldwide mandatory health protocols, the consistory had a limited attendance. Each new Cardinal was allowed only a few guests. Fr. John Voytek OFM Conv., a Confessor at the St. Peter’s Basilica, was able to take a quick photo with the new Conventual Franciscan Cardinal.

“I’m a bit ‘out of the loop’ (on a fast?) on these issues ….” Father Mauro Gambetti jokes. And the “themes” he speaks of are the duties and prerogatives of a cardinal. “In my life as a conventual friar minor there was no reason to be concerned with the issue …,” smiles the custodian of the Sacred Convent of Assisi, with a style that could be called “God’s jester” and that evokes the joy of a Franciscan memory.
Father Gambetti will be cardinal, after more than a century since the last two conventual ‘red hats.’ He knew nothing before Pope Francis announced the names of the thirteen new ‘berrettas’ at the Angelus on Sunday 25 October. “It feels like I am born again,” he responds with a perennial smile, “in the sense that like a child I have to take my first steps and in this new world I need to understand and find myself there.”
At fifty-five he will be one of the “youngest” cardinals in the Church. Worried? “Maybe I will appear a little unaware, but I am not worried. I believe that the hand of God is over everything. And, when we make the Lord’s will our own, the answer is always yes, it is always obedience.” The religious, originally from Castel San Pietro Terme in the Bolognese region of Italy, will also become bishop. “Because this is what the code of canon law calls for and this is what Pope Francis told me when I called him to thank him sincerely for this ‘joke of the Pope.’”
(Fr. Gambetti) has a calm voice throughout the long conversation with Avvenire. Within the Sacred College he explains that he wants to bring “the spirit of minority.” He repeats several times that the answer to every form of extremism, such as the one that sowed death in Nice and Vienna, is “fraternity.” And, when he reflects on immigration, he employs the incompleteness theorem of Gödel – almost a recall of his degree in mechanical engineering – to say that “the growth of complexity in a society, as following migratory movements, is a factor in development.”

Father Gambetti, when and how did you know that you were to be a cardinal?
It was after the Pope’s announcement at the Angelus. I was having a conversation with someone, when my cell phone started ringing. If I am immersed in conversation, I usually avoid answering. But I noticed that among the calls the Bishop of Assisi had also called several times. So I said: “I’m sorry, I need to know what is going on.” A special prayer for peace was also underway in the Upper Basilica for the anniversary of the famous meeting called for here in Assisi by John Paul II in 1986. I took my leave of the person in order to call the bishop, but the phone rang again. I answer and I hear: “Congratulations, congratulations.” And I said: «Excuse me?». So I discover that my name was among those of the new cardinals. I also began to think about some things that had been said to me, but that I had not in the least connected to this possibility. I hesitated momentarily and then burst out laughing.

Episcopal ordination will now arrive.
We are organizing it. It will be Sunday November 22nd, the week before the Consistory, which is scheduled for Saturday the 28th. I would like the ordination to take place in Assisi.

Will he bring the spirit of St. Francis into the Sacred College?
I will bring the spirit of service, of making oneself last, the Gospel spirit of the washing of feet. I would like to remain clearly a Franciscan, that is, a minor, in order to help the Pope loyally. This is what the Pontiff expects of the cardinals: to support him in his discernment and actions. I would add that our Order is marked by a staunch respect for the Pontiff, called, among other things, to promote unification in the Church. This feature as well can characterize my mission in a Franciscan sense.

The Pope is inspired by the Poverello. What traits stand out strongly?
The first is simplicity. A simplicity that is flamboyant in its style and gestures, but which also is complemented with depth. After all, Saint Francis managed to maintain profundity of content together with accessibility. Another dimension which unites the Pontiff to the saint is his closeness to the poverty of the world, the strong winged (‘alato forte’) proximity, attention to the existentially ‘soerte’ (?) stories of the people. Still further, there is his dialogic modality towards those who think or believe differently: all this translates into respect, acceptance and ultimately peace.

At the tomb of the Patron Saint of Italy, Pope Bergoglio has just signed the encyclical Fratelli Tutti; and you welcomed him there.
I consider this document the summit of his magisterium. Although Laudato Si ‘already had a precise Franciscan matrix, this latest encyclical has an even more evident one. It is a text that can change history, because it has universal fraternity at its center, a fraternity that concerns relationship with every human being, but also with all of creation. In a world that tends to be for a few and to exclude many, which exasperates individualization, and which fragments man to the point of dispersion, there is only one grammar that allows us to build a new future in which happiness is concrete: and that is the grammar of fraternity.

The attacks in Nice and Vienna are the antithesis of the meeting of St. Francis had with the sultan which took place 800 years ago. How is it possible to foster dialogue, even with Islam?
There is a need for all of us together to assume a fraternal perspective that implies respect; and also to reject prevarication. The neighbor constitutes a richness, even if he is different from me. If there is a lack of appreciation of differences and of solidarity, we can never have just and peaceful societies. Contrapositions, sometimes ideological, have tragic effects. In every battle there are neither winners nor losers: it is always man who loses.

Immigration and reception. What challenges?
I dream of a global community where everyone can have their place and manifest their talents. Here the Church has the task of repeating that all this is possible. Then I am amazed at certain obtuse positions regarding hybridization and migratory flows. In mathematics, Gödel’s theorem tells us that a system remains self-sufficient until new variables are added. When this happens, the system is forced to find new answers that allow for a development of understanding. The fact that women and men from other cultures arrive widens the perspective and is a potential for growth. This does not mean being uncritical about welcoming: responses are needed that are adequate to the new variables of history. Among these there is also the importance of helping people remain in their homelands and so the importance of encouraging the development of all countries.

Pope Bergoglio is at home in Assisi: he came four times. What does Assisi say to the world? In recent years we have wanted Assisi to be a space open to all in the name of dialogue and confrontation to demonstrate to humanity that what Saint Francis repeated can be transformed into reality: we are all brothers. This prophecy of our founder is one of the most vital inputs that the Church can promote in the world. If Assisi maintains this characterization, it truly will be a light in history.

Your role as Custos of the Sacred Convent is ending. And now? And now I am going out to the world. I will be a bit like Abraham who comes out of his land and goes … Although for the moment I will remain in Assisi for some transitioning and tasks to be fulfilled.

You also shares a passion for football with the Pope. You are a Juventus fan …
I am a fan, but now I feel a bit out of love with the game. Football (soccer) has for some time taken a blatantly marketing turn. And also, I have come to realize that it gives me more pleasure to watch the game well-played than to witness a victory that comes who knows how.