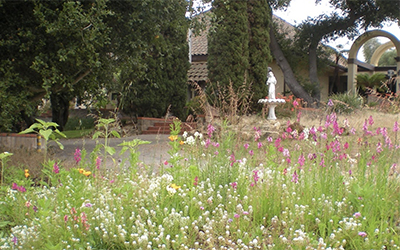 Friar Solanus Mary continues taking us on a walk through Mary’s Garden.

In the world of fauna the name of Our Lady also turns up. Let’s look at a couple of examples.

Take, for instance, the ladybird [or, in the U.S., ladybug]. I am sure that most of you are familiar with this colourful little beetle, a welcome visitor to our garden. The origin of its name – according to a tradition in England – lies in the fact that this beetle used to be known as ‘Our Lady’s bird’.

So what is the reason for the name? Well, the most common ladybird to be found has a red back with seven black spots on it. In ancient times Our Lady was often depicted in art wearing a red cloak. The crown rosaries of some Orders of friars comprised seven decades, rather than the usual five: for instance, the Seven Sorrows of Our Lady (Servite Order) or the Seven Joys of Our Lady (Franciscan Order).

The name ‘ladybird’ probably dates back to mediaeval times, as both of these Orders of friars were founded in the Middle Ages. 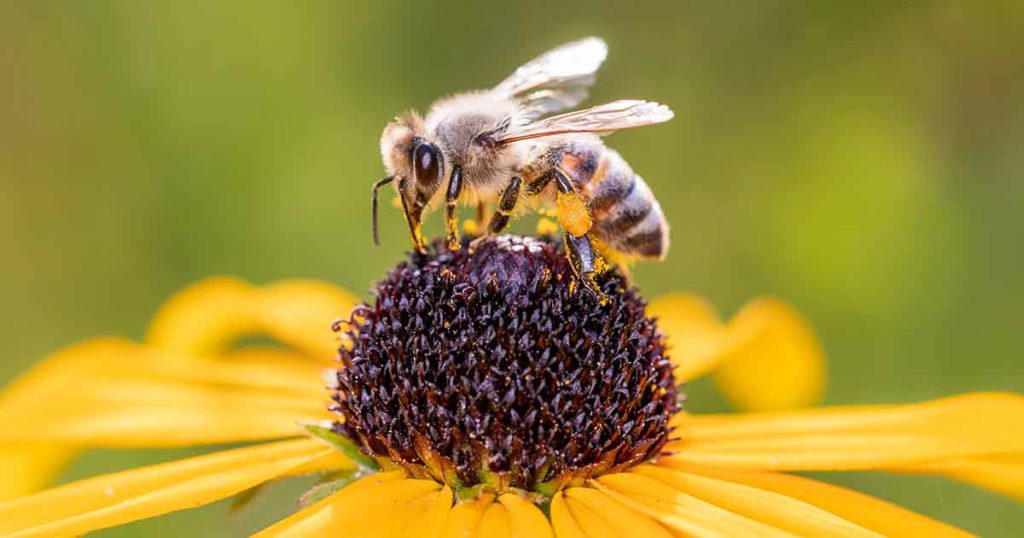 Another welcome visitor to our garden is the bee. This little creature’s work is a vital part of the food chain. The great Franciscan preacher and Doctor of the Church, St. Anthony of Padua, in one of his sermons, took some characteristics of the bee and used them as an allegory in describing Our Lady’s virtues. As we approach his feast day on the 13th June, let’s see what he writes on the topic.

On the bee, St. Anthony says:

“The good bee is small, rounded, dense and compact; she is cleaner than other flying creatures or animals, and because of this a bad smell annoys her, while a sweet scent delights her. She flees from no animal, and when she flies she does not go to different flowers, or leave one and visit another; she gathers from the one she goes to and then returns to the hive. Her food is honey, for she lives on what she makes. She makes a house in which the king remains, and begins to construct the walls of the hive at the top, coming down little by little until she reaches the bottom of the hive.”

Using allegorical language, here is what he says:

“This good bee was ‘small’ in her humility, ‘rounded’ in contemplation of heavenly glory (which has no beginning or end), ‘dense’ in charity (since she who bore Charity in her womb for nine months could not lack charity), ‘compact’ in poverty, and purer than others by her virginity. That is why, if one may put it this way, the stink of lust offends her, while the sweet scent of virginity or chastity pleases her. And so he who would please the blessed Virgin should shun lust and practice chastity. She flees no animal (that is, no sinner), rather she welcomes all those who have recourse to her, and so is called ‘Mother of Mercy’. She is merciful to those in misery, the hope of the hopeless.

In Canticles 2 the Bridegroom says: I am the flower of the field, and the lily of the valleys [Cant. 2.1]. Blessed Mary chose this flower, leaving all others, clinging to it and receiving whatever she needed from it. Nazareth, where she conceived, means ‘flower’, and she chose this place above all others. The ‘flower which sprang from the root of Jesse’ [cf. Is. 11.1] loves a flowery homeland. The food of Blessed Mary was her Son, the honey of the angels and sweetness of all the saints. She lived from the one she nourished. The one she suckled gave her life.”

The aforementioned represents only a small sample of what we find in Mary’s Garden. Why not go out into your own garden and look for yourself, and see how many more examples you can find?

The St. Anthony Rosary of Healing