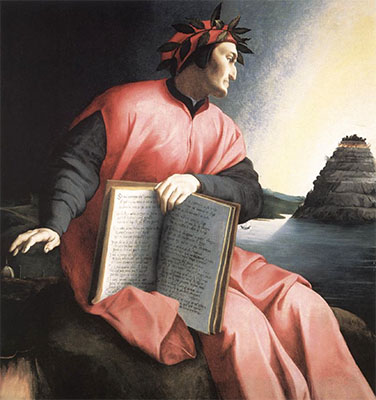 Dante and the Franciscans, Part Four

Universally known as the author of The Divine Comedy, Dante Alighieri wrote other works before his great achievement. When he still resided in Florence, he was writing verses in the comic-realistic genre, as well as love poems influenced by the ‘stilnovismo’ (new style) movement. His movement toward the use of the Italian vernacular, rather than the traditional Latin, was probably influenced also by St. Francis of Assisi’s Canticle of Creation.

The brief work called Vita Nuova is considered by many the most important work other than The Divine Comedy.

In this early work, which alternates prose with poetry, he celebrates his love for Beatrice, inaugurating the theme of selfless love. The object and end of the poem is the praise itself of the beloved woman, for which no event, not even her death, can in any way affect it. Towards the end of the book, Beatrice does, in fact, die, and in the last sonnet, the poet talks about a vision he had, in which he contemplated how glorious Beatrice was in heaven, and promised himself not to talk about her again, until he could ‘say things about her that have never been said about any woman.’

That would happen in The Divine Comedy.

Among his other works, Dante wrote 13 ‘epistles’ to various people of importance. One was addressed to the Italian Cardinals during the conclave of 1314, pleading the cause of the return of the Pope to Rome. The last and most famous of these was to the Lord of Verona, Francesco della Scala (also called Cangrande). In it, Dante declared the title of his major work (The Comedy of Dante Alighieri, Florentine in birth, but not in manners) as well as its very purpose:

To read more, please go to:

Next, we will begin our investigation of The Divine Comedy.