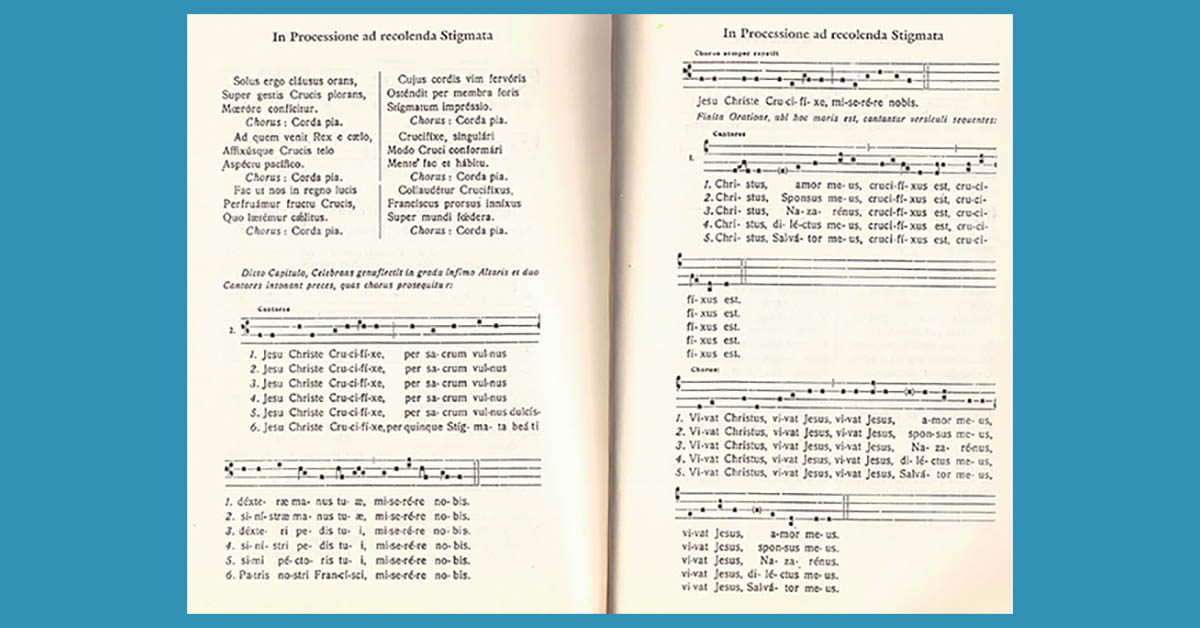 During our novitiate in 2019, we were taught two of the three songs of the Corda Pia by our novice-master, Brother Joseph Wood, and the novice-brothers performed it twice, once on Good Friday and again on the Feast of the Stigmata in September. During the lockdown, there was a craze of choirs on the internet formed of disparate individuals in different locations weaving their voices together through technology. The choir at the Oxford University Chaplaincy resorted to doing this for the Communion Motets at Sunday livestreamed Mass. I had the idea of doing something like this of friars singing the Corda Pia, and Friars Andrew and Antonio were on-board. This was recorded in 2020. At last, as happier times prevail and choirs are able to sing together in person, this project of ours has resurfaced and I am glad to submit it to the Franciscan Voice website.
– friar Peter George Flynn OFM Conv.

The Corda Pia is a centuries-old sung devotion, unique to the Conventual Franciscan Order. Its earliest attestation is the 16th century, though it could be older. It is sung in the context of a procession in honour of the Stigmata of St. Francis, performed on Fridays in Advent and Septuagesima. It is still performed in the Basilica of St. Francis in Assisi after Vespers on Fridays of Lent.

As the celebrant leads the procession, two cantors intone the chant in the sixth mode, the sad and tearful expression of Gregorian chant. Corda Pia inflammantur, Dum Francisci celebrantur Stigmatum Insignia. Devoted hearts are set aflame as they celebrate the emblem of St. Francis’ stigmata. This serves as the refrain for the verses which follow. The sequence sings of the emblem, the red badge of courage, which was imprinted upon Francis’ flesh: the wounds of the crucifix. Far be it from us to glory in any emblem, any decoration, any marker of identity, than the Cross and the footsteps of Francis. The story of La Verna, the mountain of prayer, is sung until the celebrant reaches the step of the altar and kneels. Then the two cantors sing the next chant, consisting of six verses, in  Mode II, another sad and sorrowful tone. Each verse invokes a wound on the body of Christ: the feet, the hands, the side, until the sixth verse pleads to Christ himself to have mercy on us through the wounds of Francis. The wounds of Francis have no power except through the wounds of Christ.

The last hymn is one of profound mourning, yet the serious and dignified Mode I chant belies the heartfelt grief of the lyrics. The singer gazes at the wounded heart of Christ Crucified. Christ my love, my Bridegroom, the Nazarene, the Beloved, my Saviour is crucified. And yet the verses rousingly acclaim, Long Live Jesus! To be wounded is to be alive. The soldier’s lance only pierced Christ on the cross because one can never wound a dead body, only pierce it. When He rose from the dead, Christ’s pierced heart became a living heart, risen yet deeply wounded, so He could heal the wounds of our hearts.

We can look at death with hope